iAIRE’s patented Solar HVAC units harness the sun’s energy to create an HVAC system that can be 50% more efficient than any other units currently on the market. This technology is available for both residential and commercial HVAC equipment.

We have set up a 3 ton residential unit, located in South Florida, to view energy savings on a live unit. 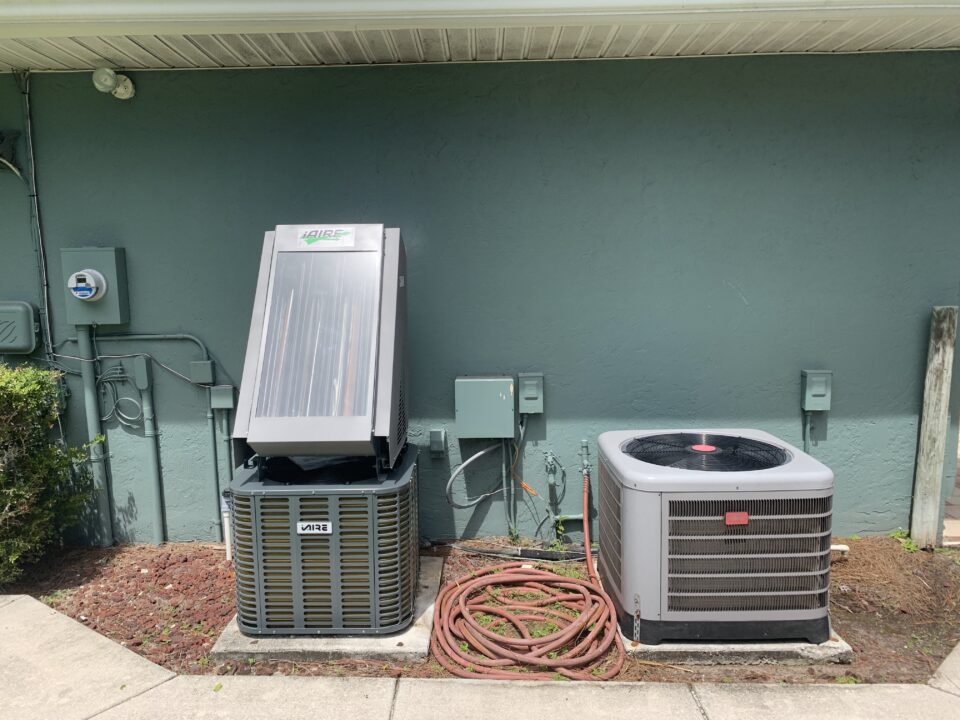 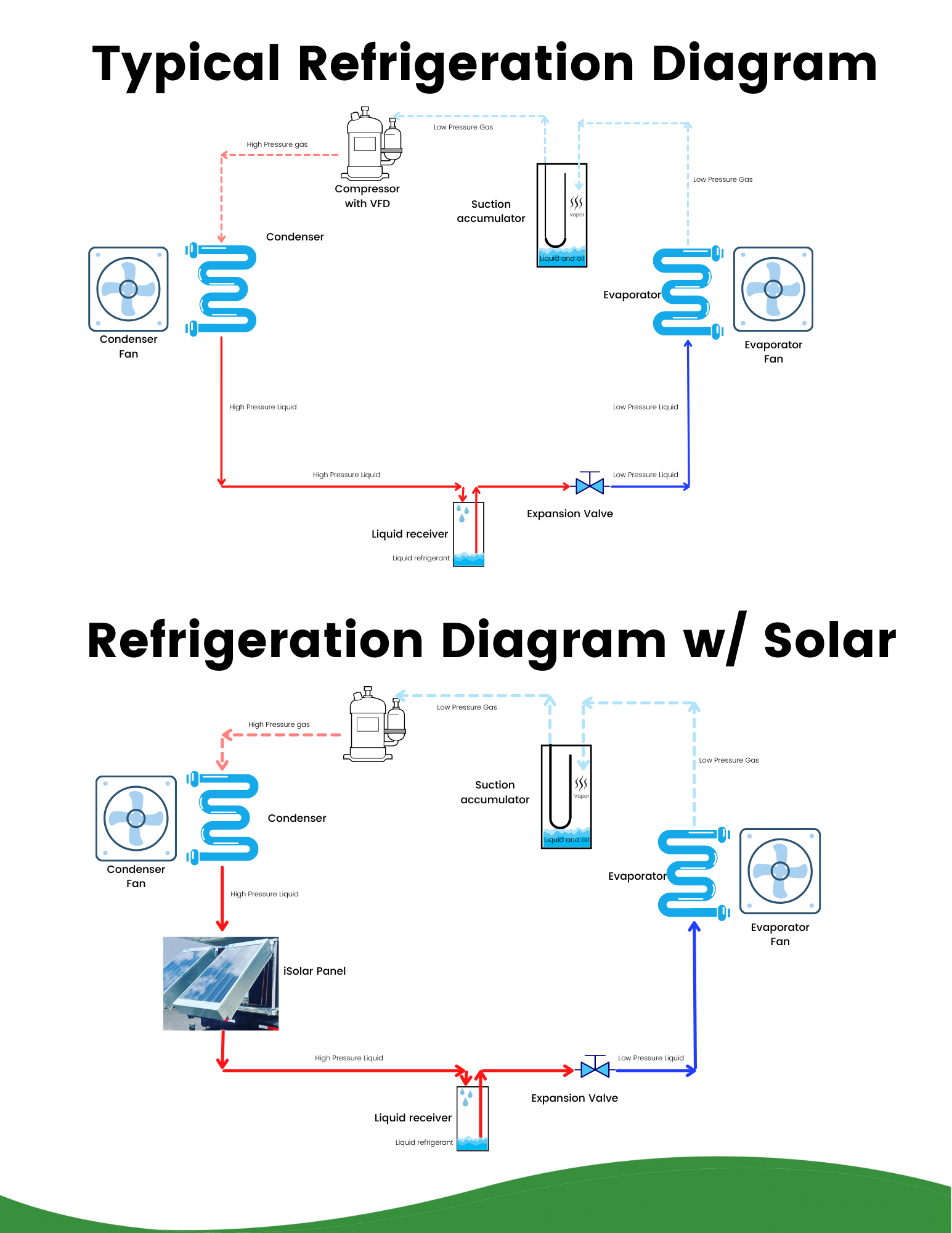 In lieu of generating electricity, the solar panel on the iAIRE Solar HVAC generates heat. The panel is installed on the condensing unit. There is a VFD installed on the compressor. The Solar HVAC unit utilizes the sun’s energy to put heat into the refrigerant. This process replaces a portion of the energy the compressor would normally put into the system from the electrical network in the building.

There are sensors in the condensing unit that sense pressure or temperature and provide feedback to the HVAC controls indicating how the system is operating.  As the solar panel adds more heat to the system, the VFD slows down the speed of the compressor to keep the system running at its normal operating pressure. As the compressor runs slower, it utilizes less electricity to operate. The compressor is normally the item in the HVAC system that uses the most energy. many times utilizing up to one-half the energy normally required to operate an HVAC system.

iAIRE is the first manufacturer to add a solar panel, a VFD to the compressor, and control logic as a complete package to an HVAC unit. iAIRE’s Solar HVAC uses a unique solar film developed by the NREL, which is more efficient than the film used in standard solar panels. This film does not need direct sunlight to produce heat. It utilizes all spectrums of light produced by the sun to generate heat. The panel produces the most energy in direct sunlight, but even on cloudy days, the solar panel will provide heat to the system since this film operates even with ambient light. This is different than most standard solar panels that need direct sunlight to operate. The solar panels are all unit-mounted to new equipment or retrofitted in the field as a modification, saving on real estate. They are installed as one single package, not requiring a remote-mounted solar panel.

Scroll down to the bottom of this page to view iAire’s FAQ’s for more information.

Solar HVAC has a substantial on-going utility savings over conventional HVAC equipment. These savings usually amounts to 40 – 50% of the energy that is used by the HVAC equipment, along with the fact that since the Solar HVAC has an inverter on the compressor, the in-rush current is low and if the utility in the area has peak demand electrical charges, these are eliminated or minimized by Solar HVAC.

In addition to the Solar HVAC utility savings, there are many incentives that federal, state, and local governments are providing for solar projects. There are also many utility incentives for these projects. For a complete list of these programs, go to https://www.dsireusa.org/. This website was created by NC State University and has Federal, State, local and power companies providing incentives for every state around the country.

There is no maximum amount that can be claimed, and the credit can be transferred from one party to another. Since iAIRE makes our solar panels in the US, iAIRE would be eligible for a 40% Federal tax credit on normal jobs and 60% on low-income housing. iAIRE has written a document to show both businesses and homeowners how to obtain this tax credit.

The tax code also allows for an accelerated depreciation schedule on solar projects. At the current rebate rate of 40%, a business could depreciate 80% of the cost of the equipment and installation the first year. Also, most states are not charging sales tax on solar projects.

This chart is an example of a 5-ton packaged roof top unit replacement on a store in Orlando Fl.

This analysis assumes a 40% Federal Tax credit, no sales tax, and a $0.13/kwh cost for power. The numbers show that this customer would experience a first-year savings of $2586.03 and then the ongoing savings from installing Solar HVAC will save this customer $14,209.76 over the first 7 years of the HVAC equipment’s life.

This chart is an example of a large commercial new construction job where the customer chose Solar HVAC over conventional equipment in Columbus, IN. 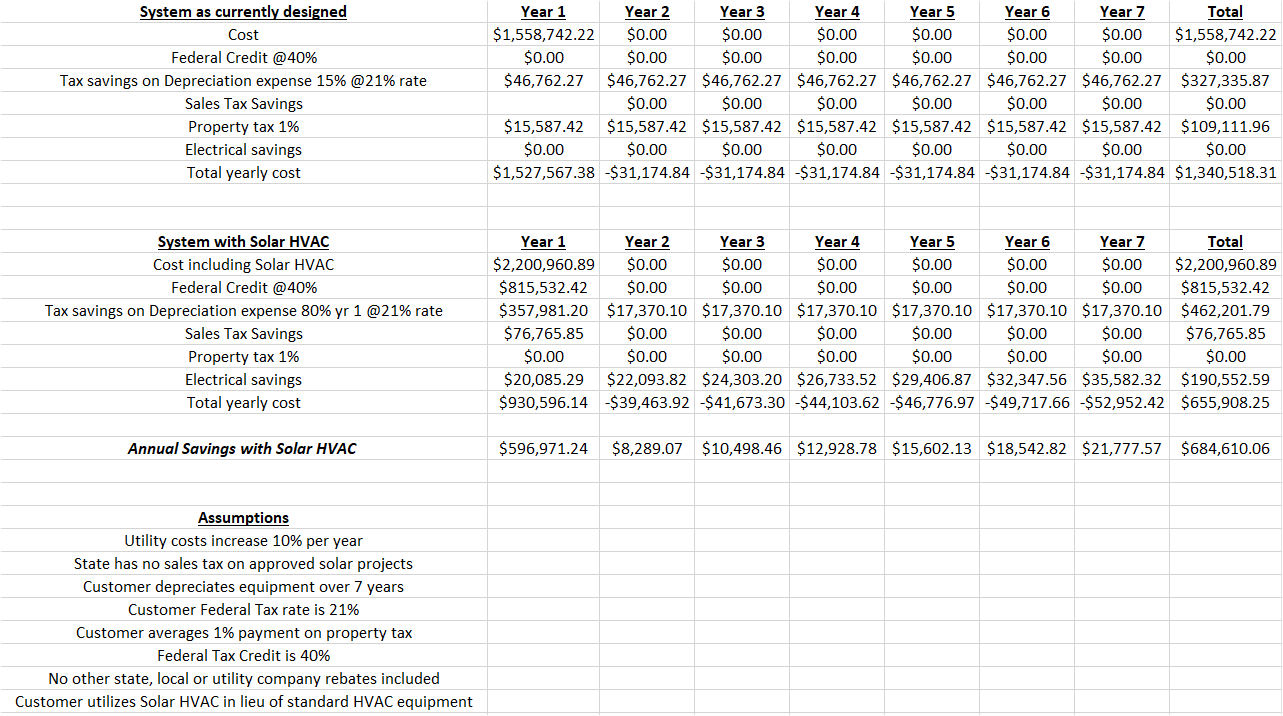 This analysis assumes a 40% Federal Tax credit, no sales tax, and a $0.12/kwh cost for power. The numbers show that this customer would experience a first-year savings of $596,971.24 and then the ongoing savings from installing Solar HVAC would save this customer $684,610.06 over the first 7 years of the HVAC equipment’s life.

As shown above, Solar HVAC can have a payback as quickly as the first year. In almost all cases, the payback on Solar HVAC is 3 years or less when installed on new equipment. Please contact iAIRE for more information or to discuss your specific project or questions.